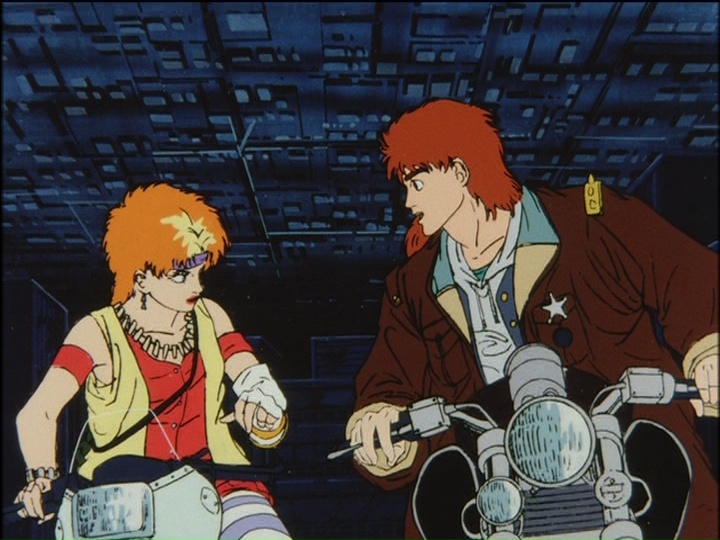 Shogo Yahagi is on the run. But this time he's got his biker gang called 'Trash' on his side and they have chosen to revolt against the authorities, and the police. An invasion from an unknown source that has threatened to destroy everything they know and love.
Plus and Minus

Minus - Aliens could have been more interesting

Plus + The Plot - Characters - Music - Scenes

Plot: hogo has been living underground for several months, hiding from the military and police in the abandoned cities and corridors below Tokyo's surface. The police have been informed that Shogo is the person who murdered Tomomi in episode I (presumably by either the brass, B.D. or one of the other military powers). Shogo has teamed up with the motorcycle gang "Trash". He reunites with Yui (now drawn with brown hair instead of green like in episode I). Although Yui and Shogo are obviously still in love, Yui asks Shogo why he never returned to the loft (at the end of episode I). Shogo has apparently been out of contact with her for a while. As for Eve, she is still releasing music videos but they are all 'pro-war', encouraging young men to join the military. The real Eve however has survived the military's attempt at deactivating her and is now runningan independent program, constantly sending out messages through different media devices (television, radio, etc) to try and make contact with 7G Operator, namely Shogo. Shogo however, having lost the Garland, can not answer her call. The motorcycle gang have made making contact with Eve their prime mission.
If you dont mind over the top violence and lots of blood and guts this Jap Anime is A MUST HAVE! If Robotech started the Jap Anime craze, Megazone 23 is what got you hooked! Seriously if it was out on DVD I would have bought it already.