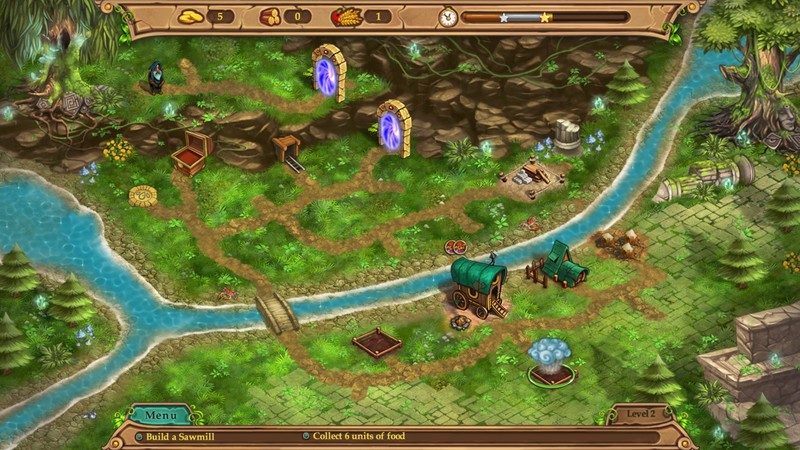 The power of the elements is in your hands. Use them to claim your kingdom! As the heir to the throne of Flaywind, you set off on a journey to peacefully assume power. But all does not go as planned. Soon, you find yourself battling a shadowy evil bent on taking what is rightfully yours. To prove yourself a worthy ruler, you must lead a small band of followers across three spectacular environments on a quest to find the source of the scourge.

Along the way, you'll rebuild a devastated land, save your people from peril, and face off against an array of bizarre enemies. Your greatest challenge will be learning to control the weather and employing it to your advantage. Use rain to replenish crops, thunder to remove obstacles, and wind to destroy ghastly creatures! Play clever and play quick, and victory will be yours in Weather Lord: The Successor's Path, a captivating time management epic! 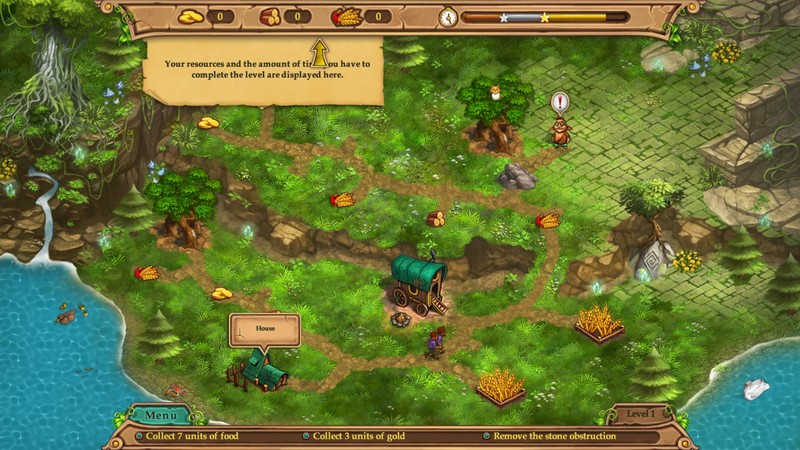 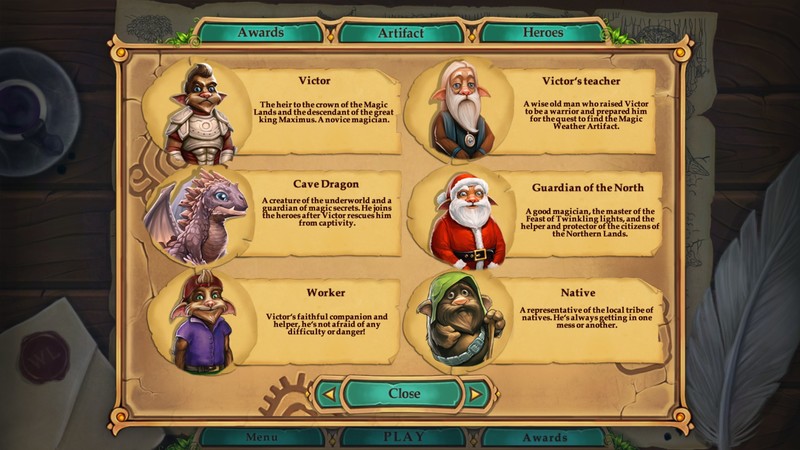 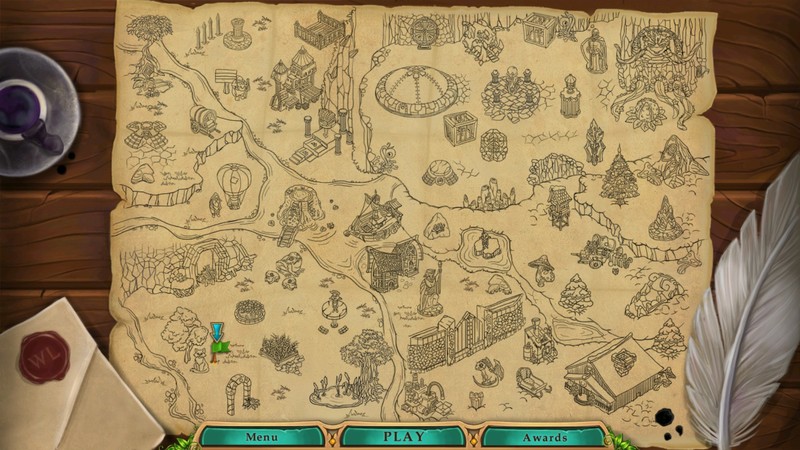 
When level 12 is completed the game freezes ( stops )
Gyseren. A nice little time management game. Unfortunately it crashes after completing level 15. Some players have experienced the same issue after level 12 already. There seems to be no response from the devs to adress this issue. So I will refrain from buying the sequels. A shame really, since I quite enjoyed the game so far.. A nice time management game. The graphics are very detailed: swans swim in the pond, chameleons on the rocks in the underground, little bunnies in the snow land. You have to balance obtaining the items you need for your goal (i.e. 15 food, 20 gold, etc) with defeating random enemies by hiring fighters or building attack towers. Certain enemies are weak against certain elemental attacks. So you will have to drag the sun icon onto your fighter or tower to defeat one enemy, then maybe the wind or water element for a different enemy. However you also need the elemental icons to refresh your crops and trees to gather more stuff. Or to melt a frozen patch of ground. It takes a few seconds for an element to refresh after it's been used.

The story is the usual epic of a young man who must prove himself and defeat the evil Uncle who has usurped the throne. However, this game gives it a twist with the people being humanoid animals rather than just typical humans. Along the way we meet all kinds of interesting creatures, even a small dragon. I really like that the characters are not human, it gives the game a unique feel.

The music is more laid back than some time management games (such as the 12 Labours of Hercules games) and it blends into the background nicely. The gameplay is stil hectic at times, though, especially if you want a gold rating for a fast time. But you can just sit back and play at a leisurely pace if you want to.

According to Steam my time is at 6 hours and I just finished it on easy. If they had Steam achievements I would play more, but so far there are just in-game achievements.

Oh, and I actually bought my copy of the game. I didn't get it free like some of the reviewers. Make of that what you will.. It's a great game, but don't get it. There's a bug that causes the game to crash out because it can't play the cut scene at the end of level 12. I've contacted them for help but nobody ever responds.
Do buy it if you're happy to only play the first 11 levels and not actually finish the game.. Weather Lord is a series of casual time management games, with Victor as a young hero able to manipulate the weather. However, Victor wasn't always the hero there as previous games were showing more humans and less cute animals.

Remember my previous review on the series, which was Following the Princess? Well, The Successor's Path is just the game before it. It's chronicling how Victor came to the throne of his kingdom, by defeating his evil Uncle Wagner. Beginning in your land, you're going to visit different landscapes. I'm currently in the snowed levels, however, given the fact that I've played little of the game in the year, it's no wonder.

The gameplay is simple: you have several objectives per level and you have to fullfill them. To do that, Victor is as any hero of a casual time management game, helped by his allies, the workers and the warriors. The workers are collecting resources (whether they're scattered around or concentrated on one place): food, gold and wood. However, when fields, mines or forests are emptied, you can make them growth again: either by sending a worker (mine) or by using a weather artifact (rain). To help you, you can also build sawmills, mills, forges or houses (this building helps to hire more workers) and upgrade them.

But there are also obstacles and enemies. Some obstacles can be removed thanks to a weather element (sun or wind for example). Enemies can be defeated by warriors or towers. A simple warrior will lose quickly health unless he's powered by the right element when confronting an enemy: sun for goblin, thunder for shaman, wind for ghost, etc.. The towers have to be build but there are only three kinds of them: sun, wind or thunder (needing the weather element to be activated and for a limited time). Enemies can come like that or coming from their lairs that can be destroyed by your workers (but there is always one enemy that will get out in the middle of it, be prepared to see your workers coming back to bases scared).

Altars can also be repaired and give bonus: stop time, faster workers, enemies in the level dying in one click, etc.. They're really useful if you're aiming for a three stars scores. You'll also discover that you can repair buttons, barns, or growth crystals (powered by sun) for the snowed levels, as there are no rain element available.

That's the core of The Successor's Path. But the game is quite difficult as I had to replay level 22 I don't know how many times and to find finally the right strategy to get my three stars score. That's why I quit the game months ago, as there are ingame achievements.

The graphics are nice and the characters are quite cute... I mean Victor and its allies because others are disgusting (like the octopus monster). The soundtrack is also pleasant.

However, what is missing is the achievements: some of the games have them like Royal Holidays and Following the Princess. I don't understand why this one didn't benefit of a little update for Steam achievements. I also prefer the new system of having your elements in a bar to the one in this game which have the elements scattered around: sometimes, it's hard to see them. But given the fact that the Successor's Path is an early game, I will not really whine about it.

Really, the Successor's Path isn't bad, it's just that I've played latter games and find them more appealing that this one because of new mechanics. But it's still nice to follow Victor's life.

Also contrary to some users, I didn't experience crashes at level 12,15 or 20, so I suppose that it's fixed.
. Weather Lord is a clicker\/time management game where you send out your workers to gather resources, competing against a clock to gain a silver to bronze medal.
Unfortunately this is a lazy example of the genre. The game is unstable: fullscreen caused the mouse cursor to not working, and I got two random crashes on completing levels. It is also simply not fun. The story is utterly forgettable and the gimmick of using weather comes to down to just another click mechanic where rain\/sun\/etc runs on a timer.

It also lacks Steam achievements even though it has an achievement system in game.

There are far better examples of this genre, even on Steam. Get '12 Labours of Hercules' instead.. Weather Lord: The Successor's Path is another awesome time management game in the Weather Lord series. It's similair to the 12 Labors of Hercules, except better and more detailed, imo. It has an interesting story, nice graphics and characters. As with most games in this genre, you gather resources, you build several different building types, use various power ups and try to beat the timer. Where the Weather Lord series differs is the weather tools. Sun to dry up, clouds to grow, and others. I highly recommend this game and series if you like the genre.