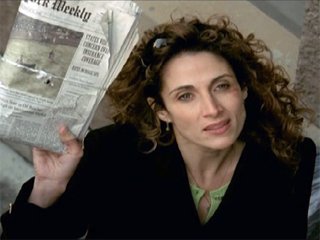 The CSIs arrive to investigate the death of a man shot in front of his house. A woman runs towards the scene crying that the deceased was her husband. Moments later, another woman also claims that she is the dead man's wife. It turns out that the three people were a committed threesome. The other case starts with the discovery of a woman dressed as a mermaid found inside the river.
Two cases: first a "mermaid" is discovered dead in the water, right off a pier. Then, a "Boy Scout"-kind of guy is inexplicably killed, shot in the eye as he leaves his downtown residence. Two hysterical both arrive - two wives?? "So much for the Boy Scout angle," says Mac.

Danny, Lyndsay and later Don, work on the "mermaid" while Mac, Stella (still marked but recovering from her recent trauma) and Sheldon take the shooting.

The beautiful young woman in the mermaid outfit was strangled ("the old- fashioned way: with bare hands," says Danny) and then dumped into the East River overnight before being found. Lyndsay, the country girl, recognizes hand scars on the woman identifying her as also being from far way somewhere out west. She feels a kinship to this woman and when - even though they catch the killer - she never finds out "why," it haunts her.

So.....as you can read, there is a lot of kinky, sick sex material in here which, frankly, I wish they would leave to the other CSI shows since they already love that stuff....and just stick more to straight crimes on this show, as they did the first season. Nonetheless, this is still a decent episode, just not quite up to standards.