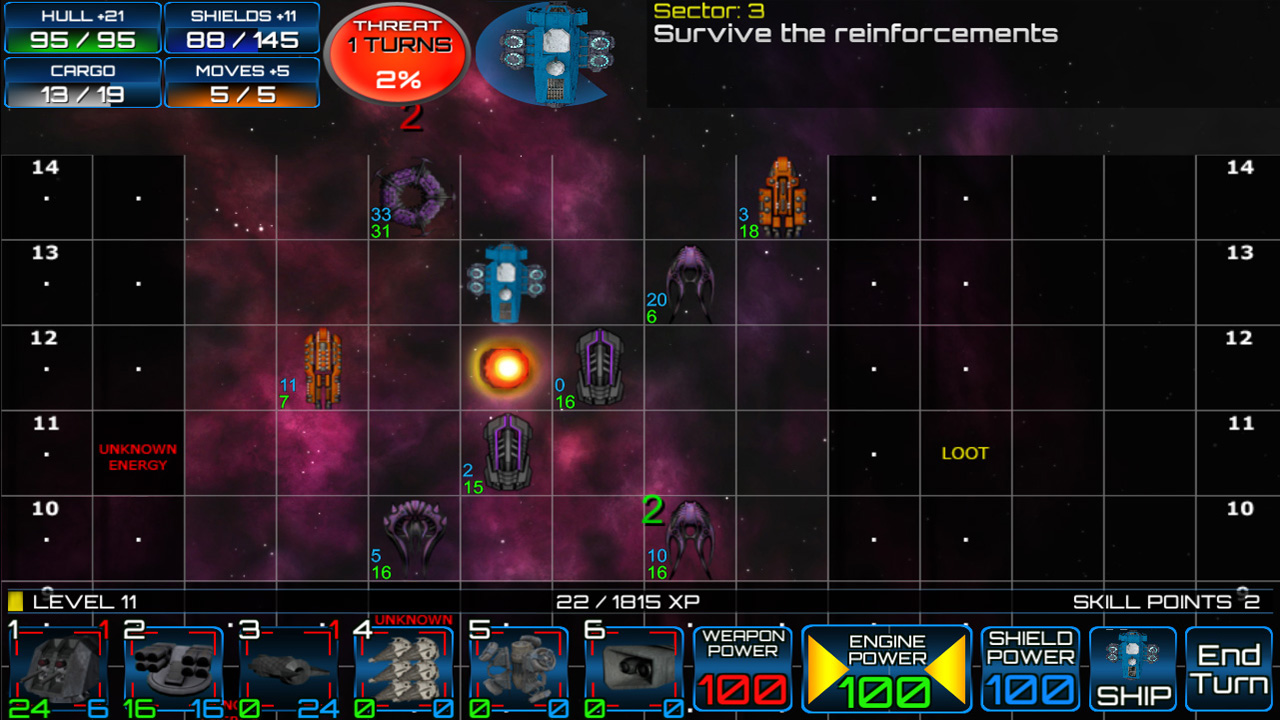 Delta Quadrant is a sci-fi turn-based strategy game with lite rogue-like elements. Destroy enemies to collect loot, gain experience to level up and use skill points to become stronger. Intended as a fun little sci-fi title, not too hardcore or difficult.

Piloting a weak exploration ship, you are in search for a new homeworld for your people - that is, until you are lured into a trap by the Dark Order. This has you end up deep in unknown enemy space, with no allies or friends. Alone.

Your attempt to escape will put you in the path of numerous enemies. Fight to survive, gain experience, level up and get improved weapons and equipment. You will die, but you will also get stronger!

As you gain experience and level up, your ship gets stronger (improved hull strength, bigger shield capacity and more powerful engines), and you'll get skill points to help improve various aspects of your ship. 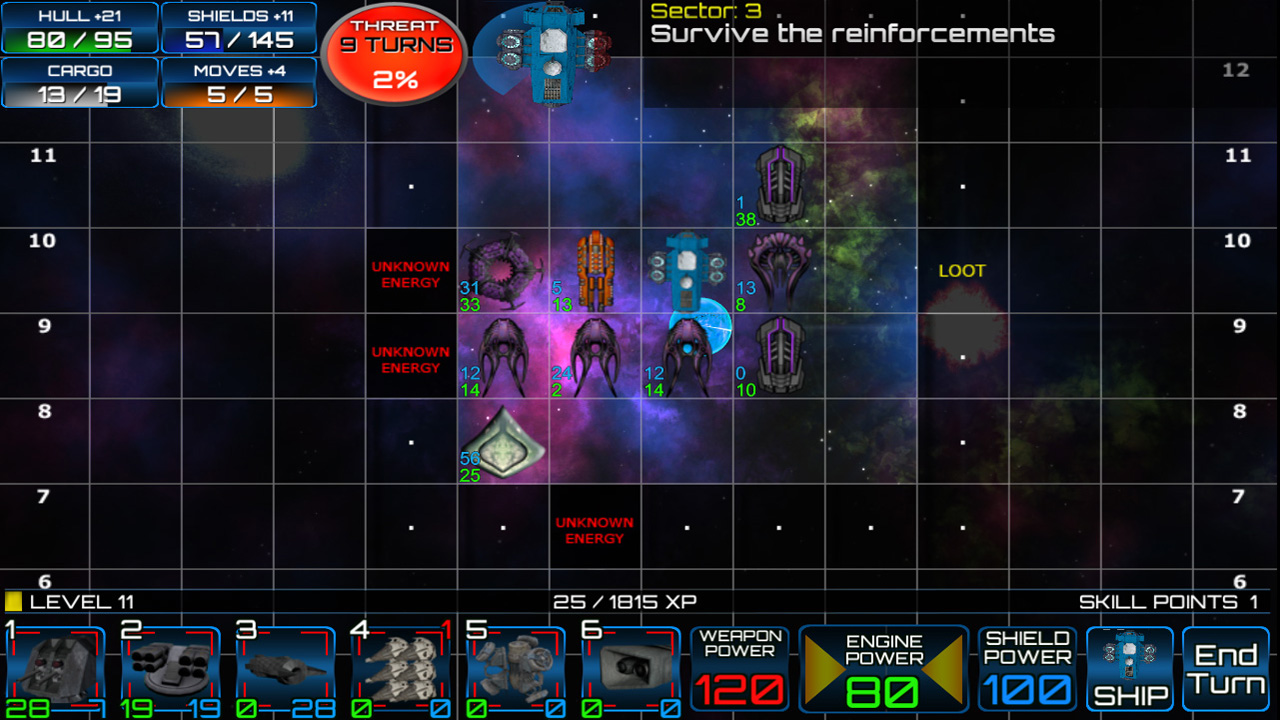 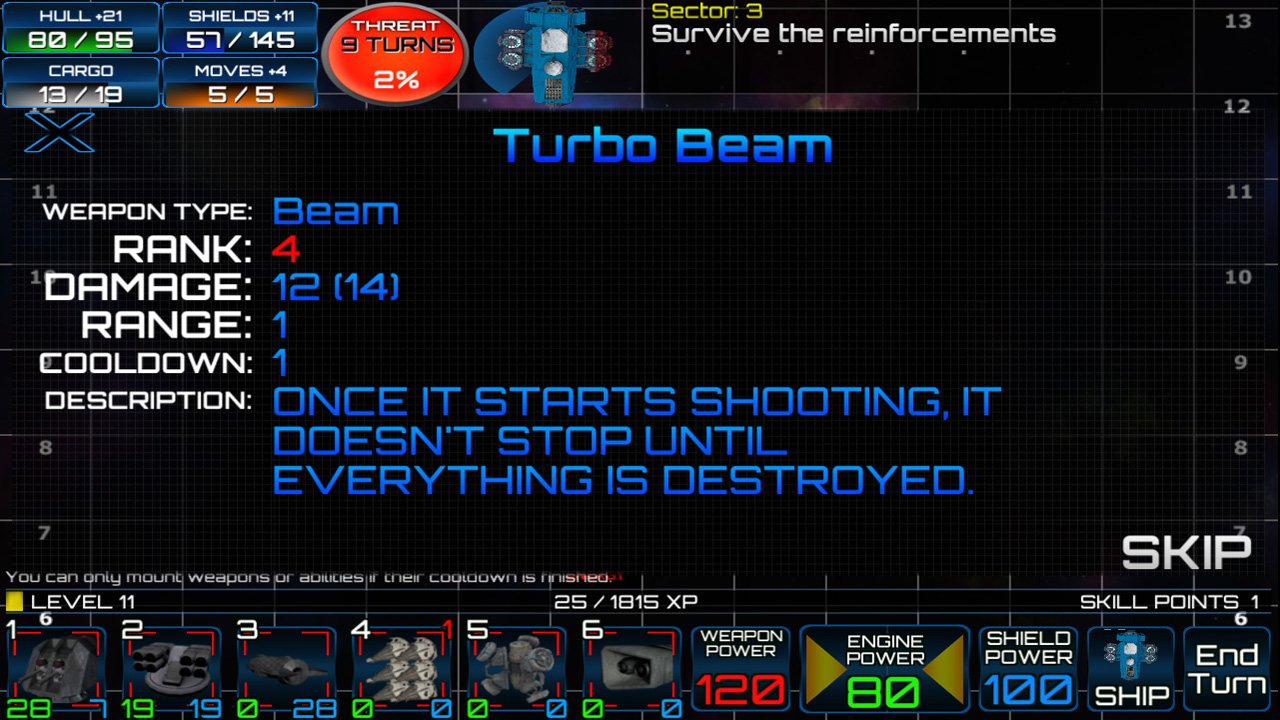 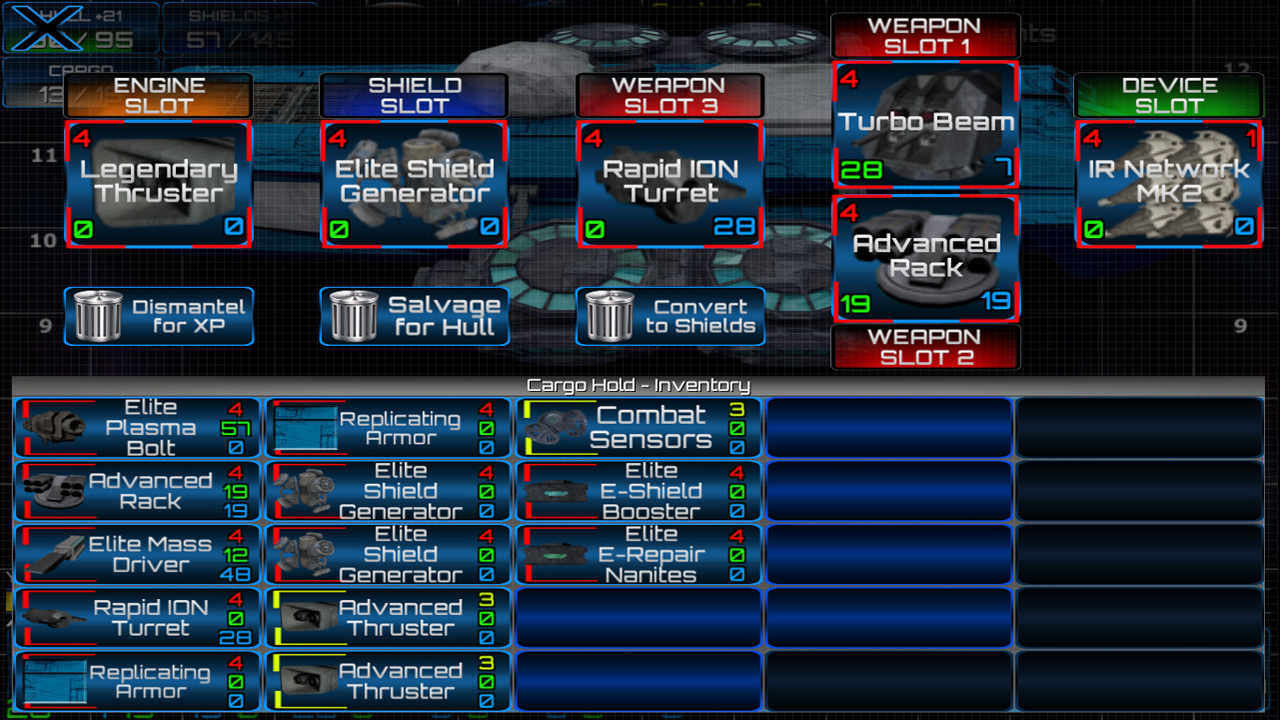 I paid $0.15 for $0.21 worth of cards, and was mildly interested because it was a turn-based strategy.

It actually turned out to be a decent game. The goal is to find a new homeworld in enemy territory and each level throws a wave of enemies at you. You can choose to complete the objective or just find the exit and escape to the next level. On the way you find equipment for your ship and earn experience to improve your base abilities. Your abilities carry over to future games, so you should do better with each attempt.

There are a few things I'd love to see improved:
1. The enemies have terrible pathing. They always take the most direct route to you unless blocked by another ship. This means they won't surround you when they should. To be fair, some levels have so many enemies that if you were surrounded, you wouldn't last long.
2. When you level up you actually have to quit the game, return to the main menu, and select a new ability, then restart. This is unnecessary. It would be nice if it let me pick a new ability before continuing with the next level.
3. The difficulty ramped up quickly, or at least the instructions for the bomber level weren't explicit enough. After having only a mild challenge, I was suddenly killed in one hit.
. The developers forgot to include a tutorial. So, we get an instructional slideshow, accessible from the main menu, instead.. First game review I've ever written on steam:

I reccomend this game. For 50 cents, it is a nice game. The UI isn't great, but for 50 cents I'm impressed if it doesn't crash!

A pros vs cons list doesn't seem to fit, but here are some perks.

All in all, much more value than I was expecting for 50 cents.. This is an interesting little space roguelike made in a free version of unity. It has promise, but may not be worth your time.

Pros:
Cheap. At the time of purchase this only cost 15 cents.
Decent help. The help screens if you flip through them do a pretty good job of explaining how to play. Some of the art assets are OK.

Cons:
This is a very rough around the edges product. There is a lot of polish missing.
Small spelling errors throughout ("sacrifise", "3 enemies is approaching", etc.)
Gameplay itself is both easy and boring, and yet also tedious. You start off slow and will be hitting the end turn button a lot.
The map does not scroll with you which gets annoying as soon as you can move faster.
The art is pretty bad in many cases.
The font is too large. The whole game feels designed for a phone and not for a PC.
The later gear does not have clear descriptions, and there are no pop-up or context menus on anything. This means that figuring out what new gear does is a matter of trial and error. Now you CAN flip gear back and forth for free, so this helps. Sometimes I noticed no difference from equipping a new piece of gear.
A story is told, but you have no input, and I found myself quickly skipping past the screens.
Needing to quit a level and "lose all progress" to spend skill points quickly gets annoying.


At the end of the day it isn't bad for someone's first try at a game. This is not the sort of project that should be sold, unless you like paying for someone else to learn game design. The game is boring, easy and tedious with poor artwork. It feels like a school project.

many things are unbalanced. as long as things are outside of cooldown, you can swap whenever you like, which takes away any sense of strategic tradeoffs. likewise for shifting energy use. abilities aren't well thought out, some are clearly massively better than others. if you level too much, the difficulty gets ramped up massively high; you're better off just deleting your save and starting over if you die.

I did enjoy some parts of it. Gearing up is kinda fun for a few sectors. Other than that, there's just not enough meat on the bones and too many balance issues to recommend it.. I have no idea what I'm doing here. Controls are wonky, and the "Instructions" is just a crappy slideshow that does not really explain anything. I have yet to beat the opening mission, because nothing is explained well AT ALL. I don't want or need my hand held... but for something as complex as this, the systems need to EITHER be intuitive or at the very least, well explained. Here they are neither.

Full disclosure, MOST of my playtime is from leaving the game idle overnight to card farm... but the time I have put in has really gotten me no closer to understanding the game or its mechanics. And, as far as the card-farming goes, I only got 3 copies of the SAME card and doubt I'll be able to break even on my 15 cent investment. So... not really worth it from the "Steam Economics 101" standpoint, either.

I'll probably give this one another try sometime down the line, and if it gets the SIGNIFICANT polish it NEEDS, I'll change this review. For now, though, I really can't recommend this.. has potential<\/b>, but there are just too many problems. could be more better.