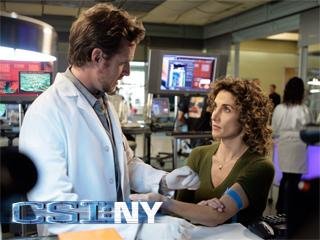 A body of a woman, Emma, in a black party dress is found in a dumpster. Her head is wrapped in packing tape. When the ME examines the body, he finds that her eye lids have been removed. This leads Mac to a recently released serial killer with the same MO. The second case possibly involves the Russian mafia. Lindsay and Danny team up to unravel the truth.
A dead woman is found with her head wrapped in packing tape and her eyelids cut off. Five years ago, a sick killer, "Clay Dobson," was put in jail and had the same MO. They make this guy look so evil that you just know he's going down before the end of this show. Mac wants him badly but has bureaucratic problems with his new boss, a new guy introduced to the show about a month ago with the idea of giving a Mac a hard time about everything.

Why film people like to have that sort of "Dirty Harry" scenario with a good cop hounded by a stupid boss is beyond me. They did that for several years on the original CSI show with a character named "Eckley," who now is a good guy after making life miserable for the Las Vegas CSI team. In the CSI Miami series, "Horatio's" superiors are always shown as obnoxious jerks. Now we have this guy in CSI New York: "Inspector Stanton Gerrard."

Anyway, the crimes in this episode, despite a bearded lady, a few immoral people (nothing new) and some snotty false suspects (the usual for each episode) it's pretty much straight crime show tonight with a dramatic foot-chase scene at the end..

On a very happy note, Stella finds out she does not have the HIV virus.