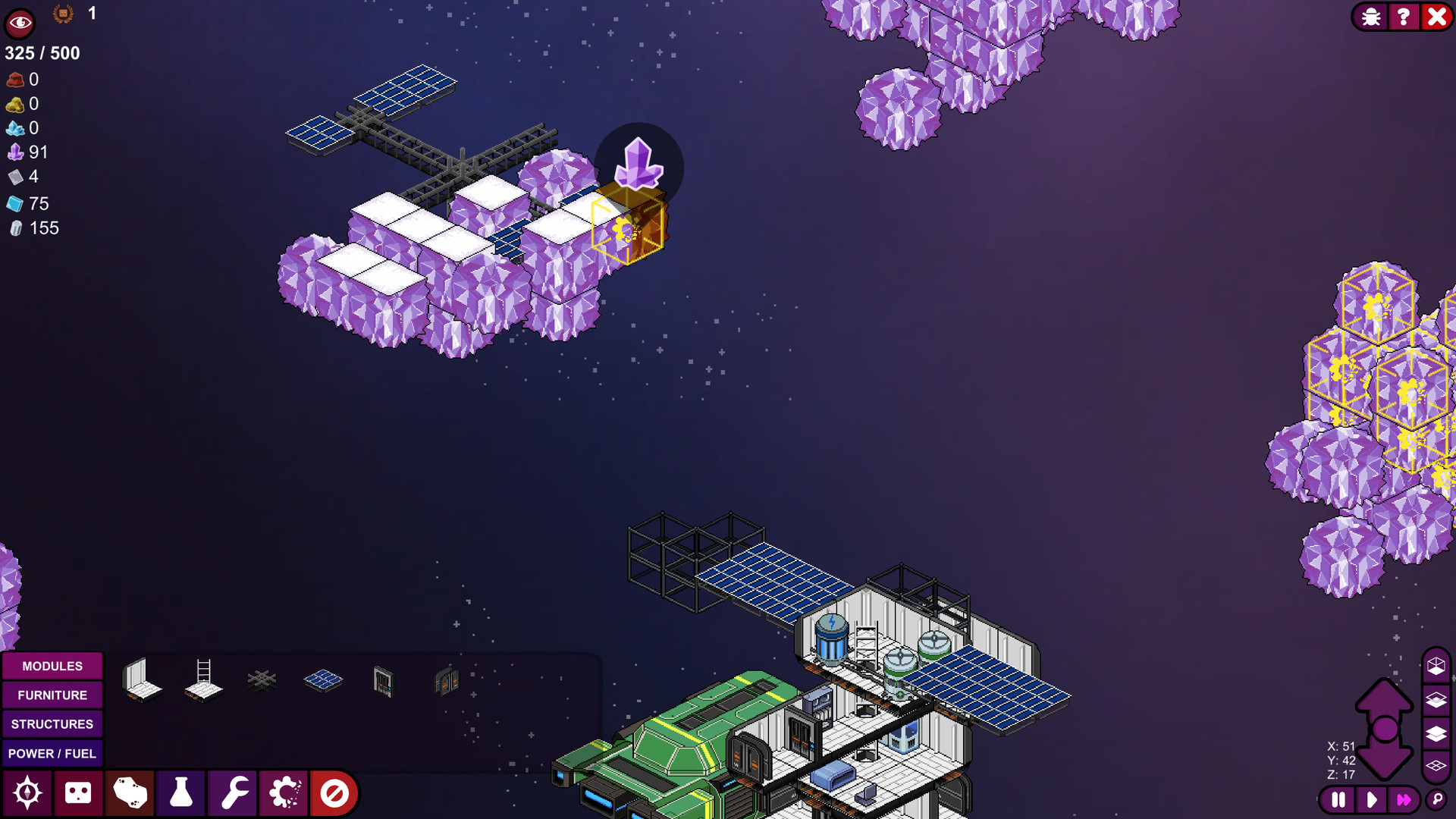 Have you ever wanted to build your own space station? Trade goods and care for the inhabitants? Explore distant galaxies and take on daring missions while trying to keep your meeple alive! Meeple station is an open-ended space station simulator in the vein of Rimworld that succeeds in doing just that. Live a never ending adventure whilst trying to make the best of your ramshackle station.

Want to build a sprawling, multi levelled station that caters to your Meeple’s needs? Focus on trade, mining and research whilst keeping your hapless Meeple alive by generating power, life support wiring your station up. Set up a botany department in the basement, only to have a fuel line cut and set fire to it. Fix leaks caused by your fuel line not being maintained, or bits of your station lacking oxygen due to an open airlock. SCIENCE!

Remember kids, failure is fun. When something goes wrong, it goes REALLY wrong in Meeple Station. Your officer could decide that the airlock isn’t necessary and deconstruct it, wiping out half your station, only for a stray meteor to hit your solar array, powering down your life support while everyone is snoring away in bed. Trade any of the myriad of goods you scrounge up. Become a mining station, strip mine entire quadrants and sell the runoff to a trading faction nearby but be wary of pirates and face eating space-squids.

Explore the galaxy in search of new resources to sell and people to meet. Go anywhere you please so long as you have enough fuel and an engine! Do you want to focus on engineering? Defence and security? Refining? Set up a research lab and hope for the best! Officers can unlock new tech, but they can be a difficult (cantankerous) bunch to appease, and if you let them, they can and will run your station into the ground! Good luck captain. 7ad7b8b382 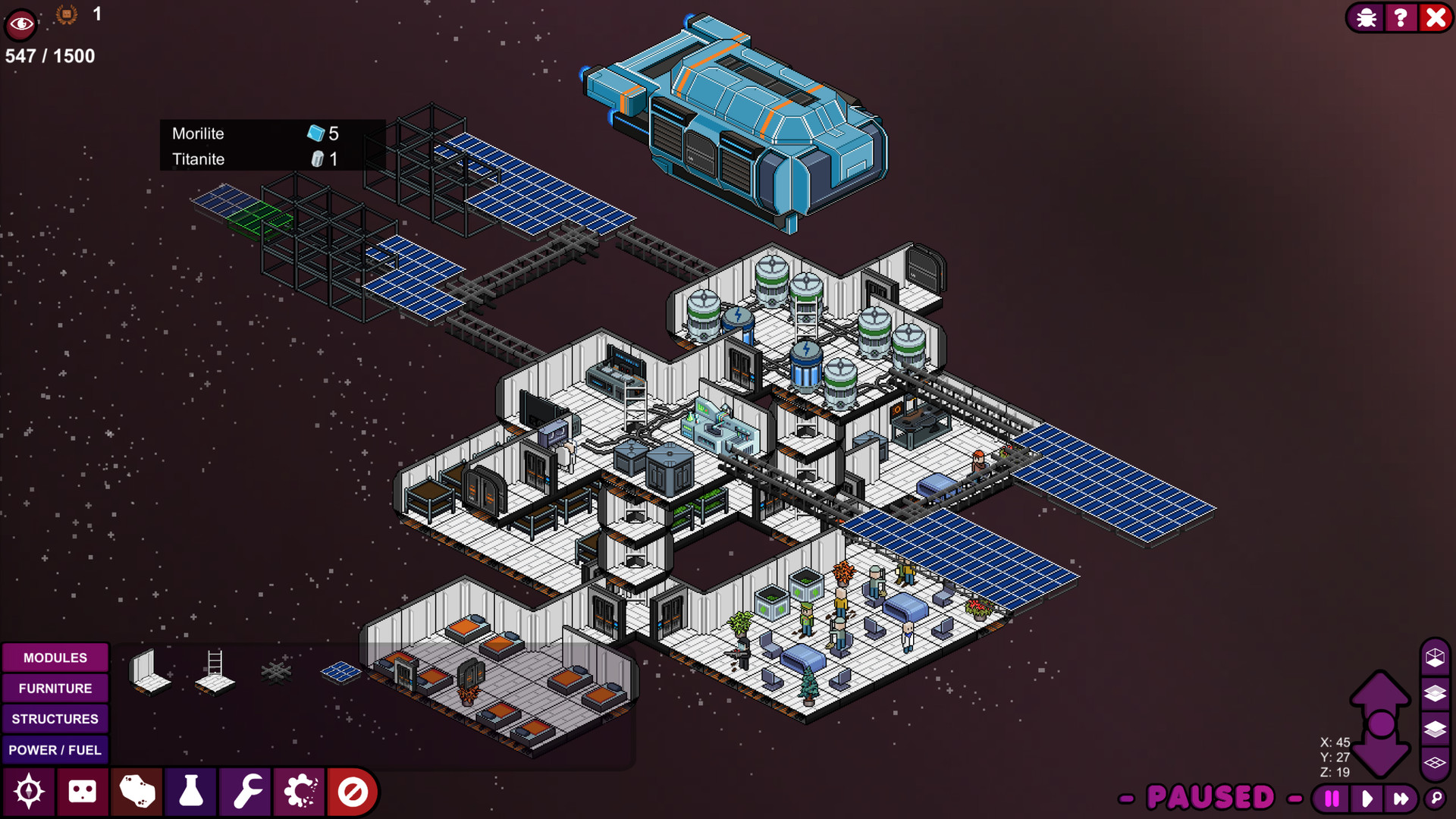 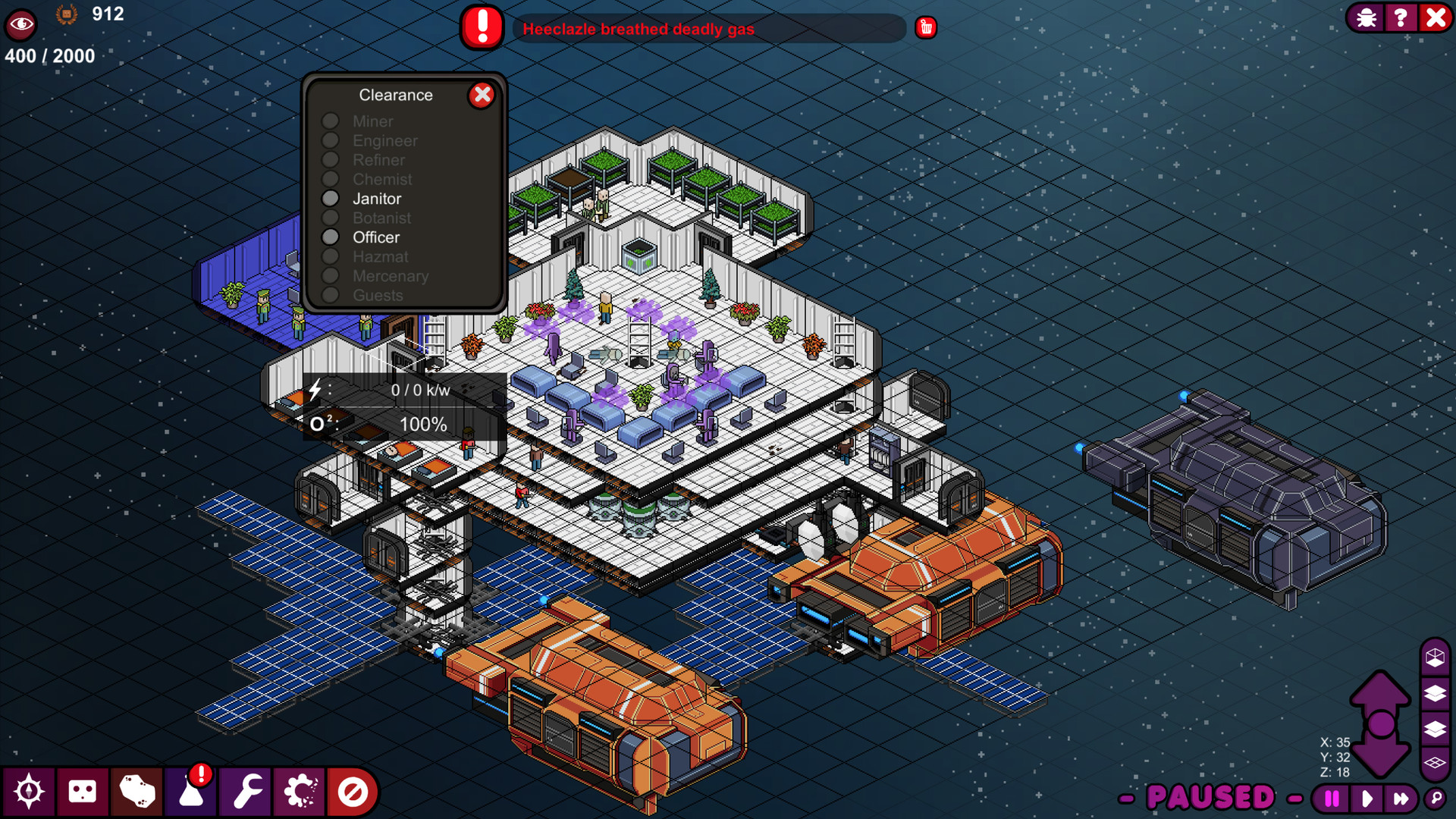 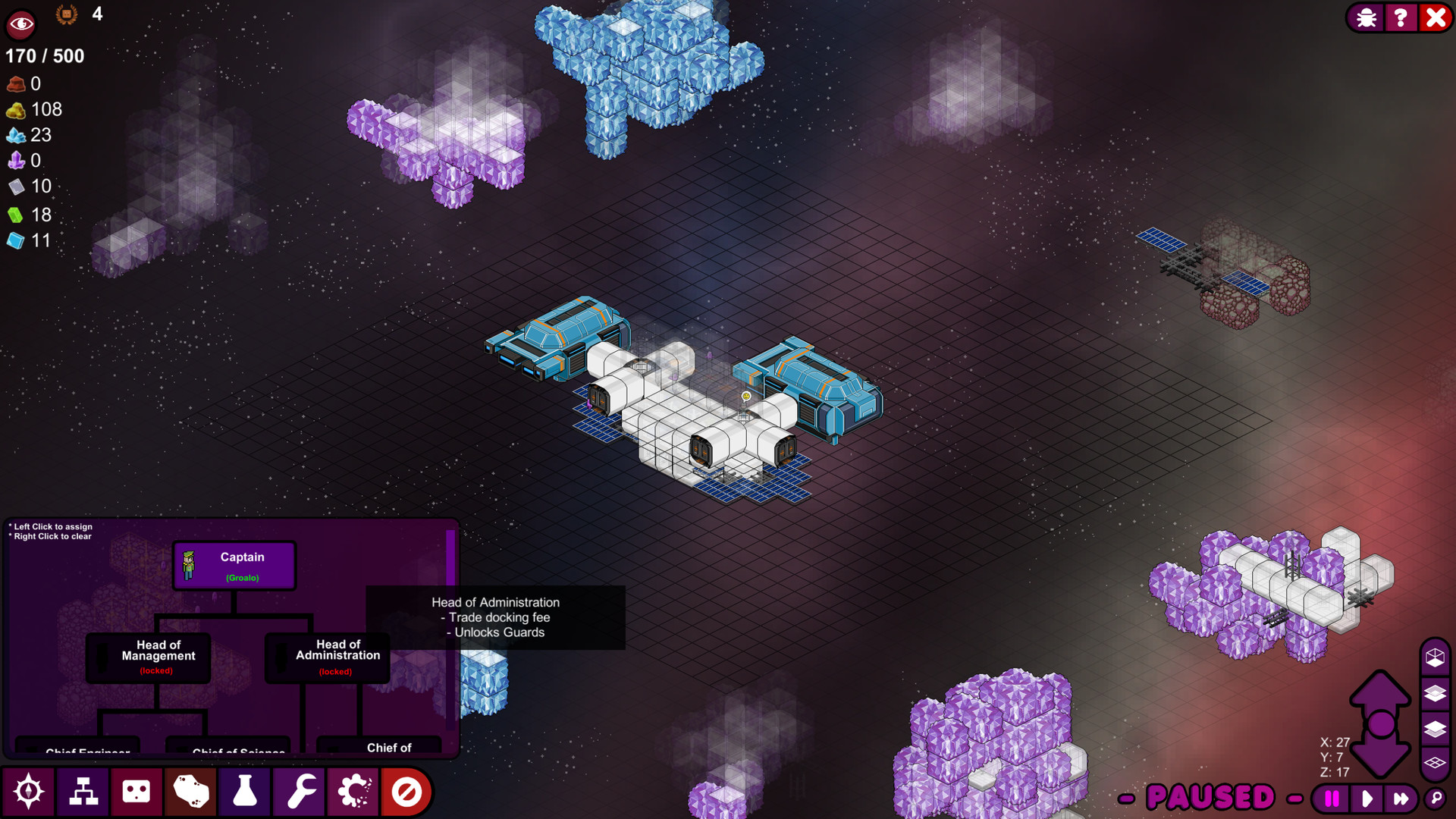 Game isn't playable. Plenty of game breaking bugs like rigging not attaching to solar panels, ladders killing Meeples, and so on. Game saves aren't compatible across versions and mechanics change completely right now (see updates) so you will also lose your entire game randomly whenever there is a new patch.

Not yet worth $20. Wait until it's finished or dev should drop the price to compensate for it being extremely unstable.. Linux support needs improvement. Audio is bugged sounding (almost sounds like static) and you have to read the forum to get past the GPU issues. Otherwise, this is a pretty fun game. It clearly needs some polish and more content but I really like the direction. Balancing pirate attacks, researching upgrades, and managing rogue officers trying to sabotage your ship offers a surprising amount of fun.

One tip, trading some reason doesn't let you hold the arrows leaving you to potentially believe you can only trade one item at a time. Holding shift or ctrl during clicks sends 10 and 100 respectively. This may have been on one of the help dialog popups but after about 100th one of those in the first five minutes you pretty much stop reading them.

I'll be looking forward to the release!. Game is super simple in design but poorly executed. Isometric view is objectively terrible and doesn't help this game at all. Doubt they will go away from that though; the AI itself can only move on the ISO grid.
Playing is easy and you're likely to only ever lose when everyone randomly suffocates because the game engine messed up math and suddenly your room with 100% oxygen doesn't even have an oxygen rating. Sometimes even with 100% oxygen people just die from asphyxiation. I guess they hold their breath or something. Engineers can get "lost" building things that are easy to get to. Often times when constructing things they do it in a very dumb manner which causes their own confusion; it's also evident that at max building speed the game engine can't keep up with building. You will see your people get confused more often when building speed is maxed because they will finish their task before the game figures out which task to give them next.
Economy is easy and pointless. Only goal is to get a big station with lots of Meeple at the moment. It's kind of a self-fulfilling prophecy where you need a bigger station for more Meeple and more Meeple for a bigger station. To what end? I dunno a Deathstar or something; if you're not proud of your station this game won't interest you.
RNG with Meeple coming to your station is awful and uncontrollable from what I can tell. Sometimes you'll just immediately fire the new Meeple when they arrive. You can't attract virtuoso's or anything specific it seems, so you get what you get. And what you get can also randomly suffocate to death. So don't get attached.

All in all I'm moderately disappointed with this game. I know it's alpha still but according to the devs it should only be like that for 3-5 more months. I was expecting a lot more progress had been made since I first saw someone playing this in the beginning of 2019. The game is super simple and should be fairly easy to code but it seems the devs are struggling with something as simple as making sure your characters don't randomly die. I was at least expecting a playable experience by this point but it seems I was too hopeful. The game doesn't work long enough to play around with all the structures, furniture, modules, ect. It will almost certainly fail soon after double digit Meeple. Also I would suggest anything you do that you do it in one sitting. Loading saves often causes a death lottery for your Meeple.

TL;DR Game is broken and building in isometric view gives me CAD fever-dreams.. So I got this game a while back and played it for about 15 min and got bored with it.
Considering I play a TON of Space Station 13 AND Dwarf Fortress,
I felt like I had to give it another chance
And man am I happy I did!

Once you get used to the layout and the mechanics you can really start to enjoy the hell out of it.
It still feels a little bare-bones but the potential is there and being improved on all the time.
I really feel like I can see the future of this being astonishing and hilarious.
It is still a diet version of what it can be and its shaping up one step at a time.
I can hardly wait to see the finished project.
(Hopefully It never is considered 'finished' because the thing that sets SS13 and DF apart from the rest is it they are both being expanded on non-stop.) With mod community this can be unstoppable!
Buy it!
Support this like its a damn Star-Citizen fevered dream with competent developers!
I know I will.. Great game, never seen any game-breaking bugs for myself. Can't wait for full release.