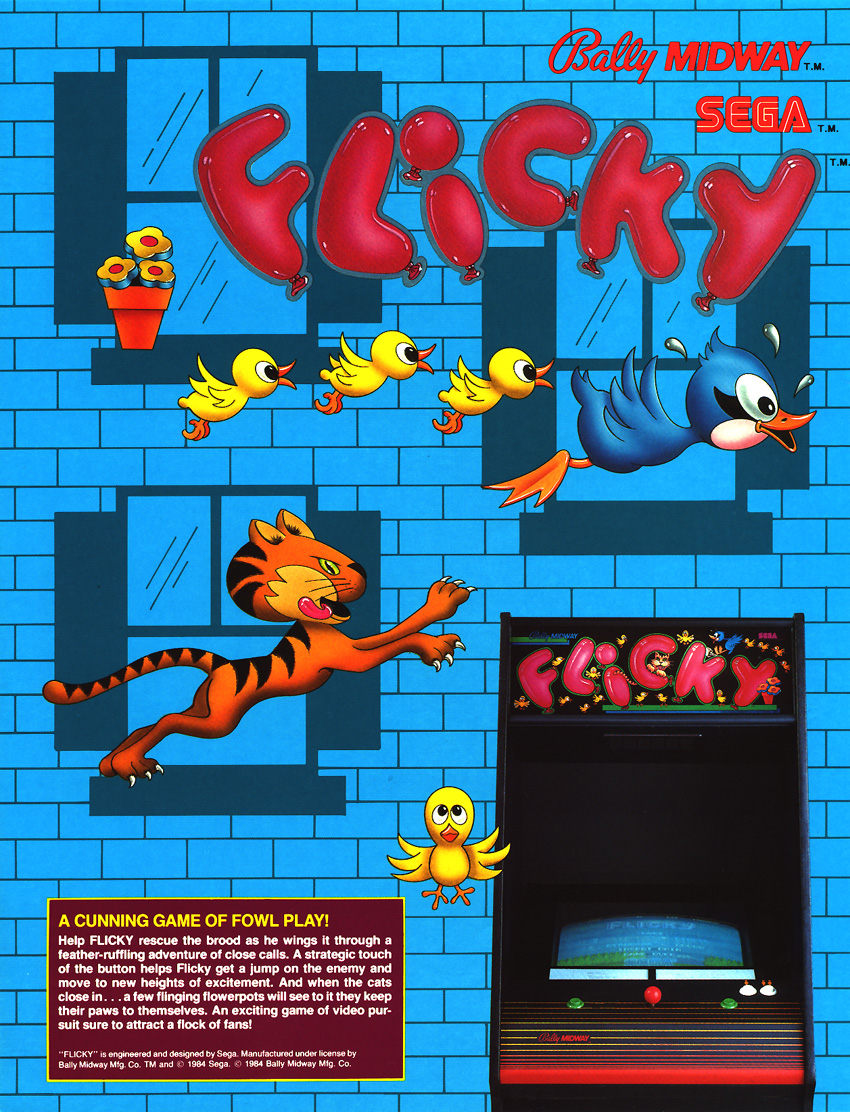 A platform game in which you control a blue bird and gather all the other birds and have to bring them safely to the exit.
It has tacky music and animation, because of how old it is, I first found it when I unlocked it on Sonic Mega collection and it was so tacky and old looking I didn't know what to think of this game I didn't even think it could of possible been sold in stores, the music and animation was funny enough to make me pee my pants. But this game is one of the hardest if not the hardest video games ever amade and also one of the most annoying if not the ultimate. A pain in the ass, even literally if you have the patience to sit down and play it for hours, but I still like it. It just takes more patience than skill for me. It's honestly not as hard as it is a freaking pain in the ass. You are a blue bird named flicky and you collect chicks and escape from orange cats and from round four on, some iguanas, who seem like your best friend compared to these cats from hell, are also on every level, and you need to make it to one of the many doors with all the chicks on the round. The houses or whatever they are change after three rounds and a bonus round where you catch chicks in a net, and the houses or heck if I can make sense what they are, are distorted looking as if it was made by someone manic with a deluded perseption of houses, each one seems to be the size of California. But The creators also could just have a good imagination and see just a house, like a poet sees things. The cats that all look the same and are all named Tiger, just pop out everywhere like cars on the freeway. I'm one of the most gentle and pacifistic people, but after playing this game for a while, I want those carnivorous cats, who seem like ultimate sociopaths slaughtering a pretty little bird, to die as horrible as possible. If you work on your patience, or at least if I do, it's a really fun game, I do enjoy it, But it just goes on and on. My brother made it to round 50 and didn't beat it yet, it seems like it's neverending and levels just keep getting made and it freaks me out, as if the game is just an evil set-up from hell. But Don't get me wrong, I'm still glad I found this game.
My review of "Flicky" on the Sega Genesis:

When it comes to most Sega Genesis games, many may think of Sonic, Ecco the Dolphin, Vectorman, Streets Of Rage, etc. However, there's also this game, which is definitely one of, if not the most unique game I've ever played. The plot is really not the biggest part of this game, as all it is is just a blue bird named Flicky taking its chicks to the exit door while avoiding bird-hungry cats. That's it. Other than that, there isn't really any plot to be seen. The visuals in this game are alright. Passable for 1991, I guess. All they are are solid colors with a few designs on them from time to time. Compared to games like Sonic, there is no competition. But, the visuals in this game work well with this type of game for the most part. The level design is basic for the most part, but the fact that it loops with everything still there adds more fun and challenging twist to the levels. I think the music in this game is pretty good, as it sort of reminds me of shows I watched as a kid with its fun and high pitched melodies. The gameplay in this game is great. The premise behind is simple, but it works well. As I stated earlier, the goal is to avoid the bird-hungry cats as you take the chicks to the exit door at the end of each level, and it can get fairly addicting. The bonus stages are awesome too, as you catch the chicks with a net for a better score and/or extra life, which can come handy, as the levels do get harder as you progress. Overall, this game is an overall good Sega Genesis game, as it's great gameplay and fun and adorable music and premise make this game one to have in your collection of Sega Genesis games. I recommend anyone who is looking for a puzzle and/or platforming games to check this game out, as it does both genres relatively well. In conclusion, this game is definitely unique, but it's still a fun and adorable game, albeit somewhat basic at times.